I want to honor the people who have made a difference not only in my life, but in the lives of musicians everywhere.

JERRY GRAFF graduated Brooklyn College and was part of the World War II Special Services Unit that included Carl Reiner, Allen Ludden and Hal David. He formed the group The Beachcombers and thanks to Robert Shaw (who conduced the Collegiate Chorale where both Jerry and his wife Judy sang), they joined the Johnny Long Orchestra and made several records for Signature. They became the lounge act at the Sands Hotel in the 1950s and also opened for major acts in the main room (Jerry also wrote special material for Lena Horne). Returning to New York, he befriended musical director Jack Pleis, who called him for recordings and made him a vocal contractor. Jerry worked with many major acts, but is most identified with the Barry Sisters as an arranger and musical director. He was part of the reconstituted Pied Pipers in the early 1980s. He worked as a vocal supervisor on Woody Allen’s “Bananas,” and you can see him on camera on the Christmas segment of “Car 54, Where are You?”

Jerry moved to Sherman Oaks and wrote music for Beautician and the Beast, as well as continuing to write and coach singers.

In 1977, I met him and soon became his mentee he would later introduce me as his G-dson. I was allowed to observe recordings sessions and rehearsals. He became my second father, and eventually a valued colleague. I produced recordings for him, and in April of 1998, I orchestrated his vocal arrangement for Lynn Roberts of “The Lady’s in Love with You.” The photo reproduced here comes from that session.

I cannot begin to describe how much I learned from him, and how he shaped many of my musical ideas and procedures. He would always discuss ‘values:’ what is an act supposed to accomplish, how does each song fit? He wrote the best medleys I’ve ever heard: mini-operas that got standing ovations from audiences all over the world. He believed in structuring a medley with a theme where each song belonged lyrically, not just a bunch of songs strung together. He had creative ways to manipulating tempo and harmony so that the listener never knew what would happen, but would adore it when it did – logical yet surprising.

I am blessed that he chose me to share his knowledge, his kindness, and his rare gifts, as well as treat me as a member of his family. 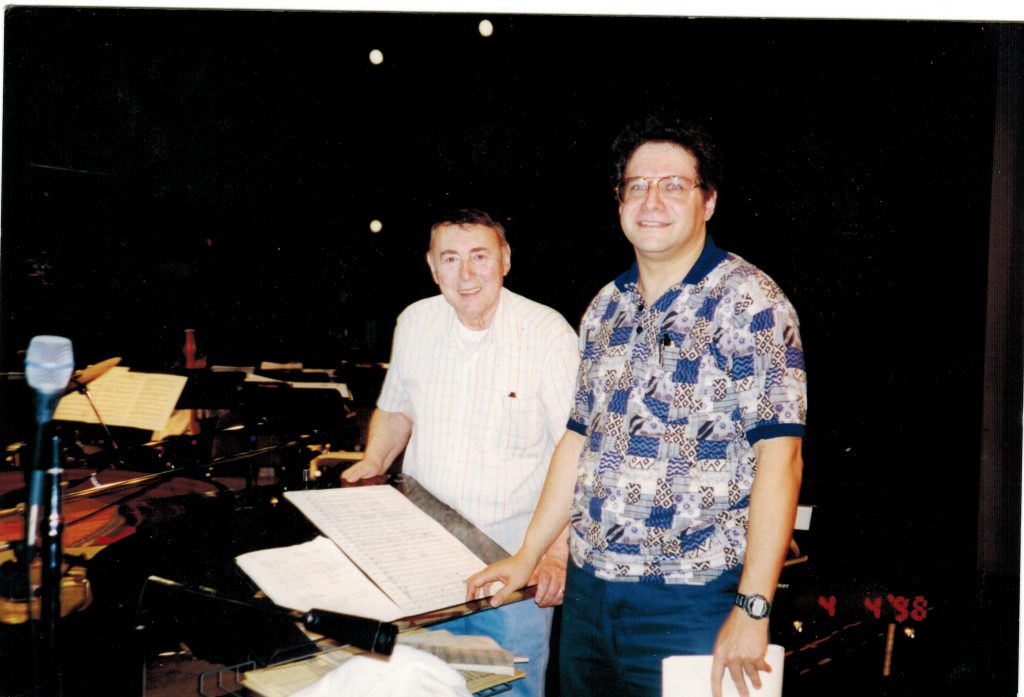 ROBERT FARNON is acknowledged as one of the greatest composer/arrangers who ever lived. Born in Canada (ironically on July 24, my birthday as well), he was part of the CBC Orchestra as a trumpet player and vocal arranger while still a teenager. When the orchestra’s conductor Percy Faith went to the U.S., Farnon took the ensemble over. During WWII, Farnon conducted the Allied Expeditionary Forces Canadian Band, right alongside the U.S. Unit directed by Glenn Miller, and the U.K. Unit conducted by George Melachrino. Farnon’s arrangements were immediately lauded by both musicians, and he decided to remain in the U.K. except for a short time as an orchestrator for Broadway. Farnon appeared on radio and television, wrote several film scores (perhaps the most notable being “Captain Horation Hornblower”), recorded several albums for Decca (London in the U.S.), and arranged and conducted for Frank Sinatra, Sarah Vaughan, Joe Williams, J.J. Johnson, Joe Williams, George Shearing and Eileen Farrell. He wrote hundreds of themes for the publisher Chappell, and many are still heard all over the world on radio, television and even shopping malls.

In the mid-1980s, I wrote to Bob to offer my services editing his most notable pieces and arrangements, in effect creating a Robert Farnon Edition. Bob immediately sent me scores from his library and arranged for me to get more from his publisher. In effect, I set up a master class in composing and arranging with the greatest of them all. I was one of the few who actually got to study his scores, since many of the originals were destroyed in a fire, and what remained were published parts that were marketed by the publisher. In creating new scores, corrections were finally made, and Bob had the chance to make revisions. Over 42 scores were completed. At this writing, Jazz Lines Publications is exploring publishing at least some of them.

Once again, a master musician shared his work and his friendship. The scores revealed a superb musician who had a Mozartean facility in creating beautiful, often profound music that has still not received its due. Professional musicians have nothing but praise for this work, and many well-known arrangers have cited him as a major influence; they include John Williams, Marty Paich, Andre Previn, and Herbie Hancock.

GERRY MULLIGAN was a baritone saxophonist, but also an influential composer/arranger. In fact he had already written for the Johnny Warrington and Tommy Tucker bands as a teenager before he joined Gene Krupa. He was still finding his way as a saxophonist, but wrote about 24 arrangements for Krupa, all of which Gene bought and played. He later wrote for Claude Thornhill and Charlie Parker (I restored an unfinished arrangement of “Yardbird Suite” that he gave to Parker right before he left for the West Coast). He led a legendary group with Chet Baker and later Bob Brookmeyer, who was the co-leader of the Mulligan Concert Jazz Band in the early ’60s. Mulligan later wrote for symphony orchestra. He was an amazingly adaptable musician, playing with instrumentalists of various styles and blending in easily.

I worked with him in 1995, creating lead sheets for two play-alongs, and I produced the recording sessions for the accompanying CDs; these sessions were the last in which he played his instrument. He grew to trust me with his music, and was a joy to be with. Working with him resulted in another master class, as we had extensive give-and-take about the lead sheets and the nature of his music in general. He shared a great deal of his musical philosophies (I wasn’t going to bother him with facts about his life that were easily available), and Franca Mulligan later told me how much he looked forward to my sessions with him, as it caused him to look at much of his music in a different way. I regret that I didn’t have the opportunity to work with him more as a producer and arranger (he wanted me to write for him), as he was already quite ill when the first play-along was completed. He passed away in January of 1996.

NELSON RIDDLE – What can you say about this legendary composer/arranger that has not already been said? I first met him with Jerry Graff when they both participated in a Roger Rudnick-produced concert in Hackensack, NJ. He was profuse with information and advice once I told him that his Ella Fitzgerald album of Gershwin songs made me want to be an arranger – he told me that he was glad to talk to me since I hadn’t brought up Frank Sinatra! Some years later when I was at Warner Bros., I was told that he’d written an arranging book, which was delivered in a paper shopping bag. One Friday Anthony Esposito, my boss at Warner Bros. asked me to bring it home and read it to see if it was any good. I’d been waiting for him to ask, and it was. Nelson considered this book to be one of his most important contributions to music, but sometimes wondered if anyone wanted to read it. We both assured him that yes, many people would read and treasure it, and many non-musicians bought the book since it had a lot of biographical information found nowhere else. The book is still in print.